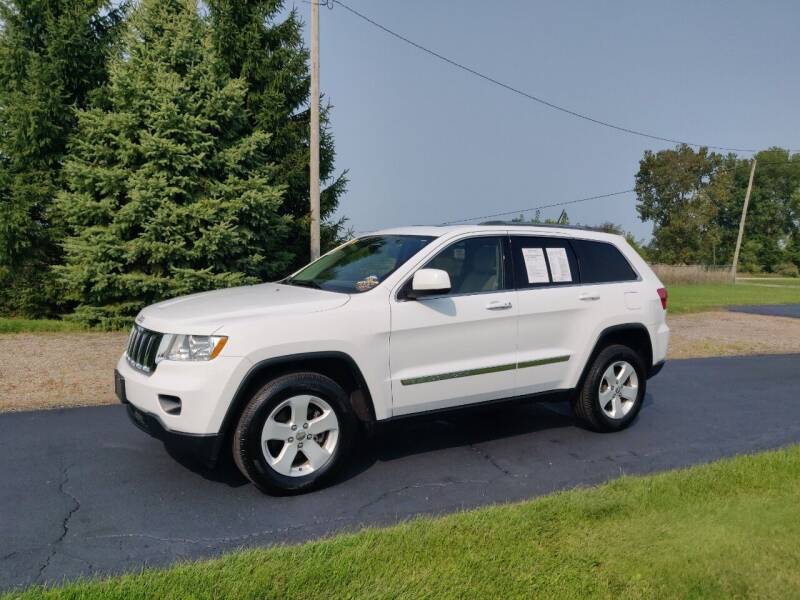 Ready for a test drive?
Let us know what works for you.
Have additional questions?
Give us a call and we'd be happy to help!

Check out this Rust Free Southern 2013 Jeep Grand Cherokee Laredo with limited package features. This 4x4 has been well maintained and has a clean CARFAX! The On-road refinement, as well as a well-trimmed cabin and traditional off-road ability make the 2013 Jeep Grand Cherokee fully competitive with other midsize SUVs and crossovers. Despite the new gloss, the Grand Cherokee still delivers off the highway. This Jeep is powered by a 3.6-liter V6, good for 290 hp and 260 pound-feet of torque. A five-speed automatic transmission is standard. Fuel economy with four-wheel drive is an estimated 16 mpg city/23 mpg highway and 19 mpg combined. The jeep comes equipped with the Quadra-Trac I system which essentially functions as full-time all-wheel drive. This particular Jeep is equipped with the following options: Automatic headlights, foglamps, cruise control, full power accessories, dual-zone air-conditioning, a tilt-and-telescoping leather-wrapped steering wheel and a six-speaker sound system with a CD player and auxiliary audio jack, roof rails, keyless ignition/entry, a power eight-way driver seat (with four-way power lumbar) and satellite radio. The Security and Convenience package includes remote engine start, a cargo cover, an auto-dimming rearview mirror, Bluetooth phone connectivity and a USB/iPod interface. Furthermore this Jeep has the Laredo X package further adds 18-inch wheels, a nine-speaker premium sound system (with satellite radio, digital music storage and touchscreen interface), dual-zone automatic climate control, leather upholstery, a power front passenger seat and a rearview camera! The 2013 Jeep Grand Cherokee comes standard with four-wheel antilock disc brakes, stability and traction control, front side airbags, side curtain airbags and active front head restraints. In Edmunds brake testing, the Overland V6 stopped from 60 mph in 125 feet, a good result for this segment. The SRT8, thanks to its high-performance tires, made the same stop in an impressive 112 feet. In government crash testing, the Grand Cherokee earned an overall rating of four stars out of a possible five, with four stars for overall frontal crash protection and five stars for overall side crash protection. In testing by the Insurance Institute for Highway Safety, the Grand Cherokee received the highest possible rating of "Good" in the frontal-offset, side and roof-strength crash tests.